According to a commemorative stone found in the antiquarium, the amphiteatre was built by a member of the Gens Petronia. This impressive building, which was used for gladiator fights and hunting wild beasts, is located on the northwest side of town and covers an area of about 6900 mq (74,275 square feet), Today, just 10% of the total size remains: part of it is incorporated into buildings erected in the Middle Ages.

Its remains are of moderate size and are fragments of walls, vaults, arches, pillars, wedges, circular corridors, armillas (snake shaped bracelets), podiums and cells, all of different materials and belonging to different works. 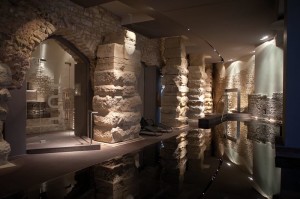 Presently located inside a hotel that is part of the Santa Caterina monastery are seven large pillars, some of them still intact. They are remnants of the tiered seats entering the cells and other remains, including stone objects of the previous era such as pile foundations, main wall remnants and niches. Situated about three meters from one another, in a private courtyard on the south side, are three impressive pillars on parallelepiped stands. They are well preserved, made of big overlapping blocks and rustic ashlars. One of them is reclined downstream, probably because of an earthquake around the year 1000. There are other remains throughout: corridors, fragments of steps and concrete walls, which clearly indicate that this was one of the monumental entrances to the amphitheatre. The shape of the area, defined by a tall modern elliptical wall and surrounded by a medieval quarter, is clearly visible from above.

The Rocca Minore is to the north and, in front of it, the impressive Rocca Maggiore, where there was first an Umbrian, then a Roman Acropolis (city) 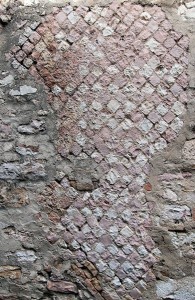