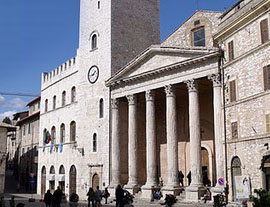 Roman Assisi originates from the urban setting given to the Assisi hill by the Umbri, who came from the mountains and settled here before the Romans. The Umbri, “antiquissima gens Italiae“, the oldest people in Italy according to Pliny the Elder, had an agricultural and pastoral society.

They gathered in the saddle upon which the town would rise. This determined the first orientation of the town, towards Mount Subasio; from Monte Subasio the waters flow down, herds find nourishment, cultivation is possible and the most important communication routes depart from there. A political and urban synergy between the Umbri and the Romans (with contributions from the Etruscans) determined the layout of the town for centuries.

The entrance into the sphere of Roman influence starts in 295 B. C. with the Battle of Sentino, but the main step toward Romanization was the social war of 90-89 B. C. After this war, inhabitants received the civitas, preserving the local government and were enrolled into the Sergia tribe, which joined the Regio VI under Ottaviano Augusto. After the War of Perugia, 41-40 B. C., Asisium went through a reorganization of its territory.