SOUTHERN CITY WALLS AND GATE (end of III century BC)

Still intact in this rather large area are significant remains of the city walls, measuring hundreds of meters. Although they were not defensive walls, the walls spread out for about 2500 metres and have been made with accuracy and adequate choice of materials, a characteristic of the Roman building style. They are clearly visible along via Ancajani, in the garden below on the Marcucci property (about 80 m long, 6 m tall), as well as in the garden of the convent of S. Apollinare (about 70 m long). They are also visible south from the Vescovado and left of the Mojano Gate entrance, where the walls were used as a support for an imposing palace, the seat of the Curia. These walls are composed of small blocks of different sized, pink rough-hewn limestone, with a maximum size of cm 30 x 50 in front. The craftsmanship reveals an intervention by Etruscan masters. In fact there are important similarities with the walls of Perugia (except for the materials used). 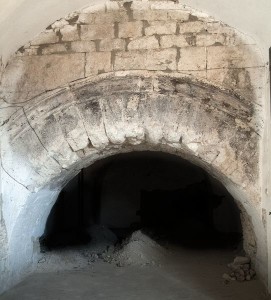 It is the same for the decorations on the city entrance gates, even if the ones in Assisi are not as imposing as the “Etruscan Arch” or the “Porta Marzia” (also the same for the city gate inside palazzo Fiumi-Roncalli, in Piazzetta Garibaldi, still left in situ). It is majestic, more than 4 metres tall, with a light towards the outside of  cm 363. The arch has a decorative ring pattern and is fully visible, being simple and elegant at the same time.