Palaces of the Municipality 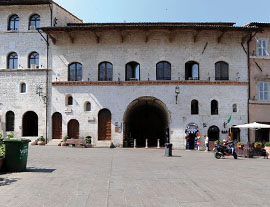 Piazza del Comune is a large space with a lengthened shape corresponding to the central terrace of the ancient city. It was once dominated by a temple and surrounded by colonnades. After the fall of the Roman Empire, the free space was gradually occupied by private houses, except for at the widening at a three street crossroad. The rebirth of this square is strongly connected to the origins of Comune Medievale (Medieval Municipality), whose first seat was in a cell in the Temple of Minerva (1212), after being moved from another seat near San Rufino in the upper part of the city, (as you can see there is a street still named Via del Comune Vecchio – literally Old Town Hall Street). The first houses in the square were destroyed during the disturbances of 1198. Other expropriations took place in 1228 and 1275. In 1881 the square already had its current size, with the road up to the mountain opening up to vehicles (via San Gabriele dell’Addolorata).

This square, heart of the social, cultural and political life of the time, was so important that we decided to dedicate part of the itinerary to the palaces and monuments located along its perimeter: as these monuments have witnessed the historic evolution from Roman Municipium to Medieval Municipality and up to the present time. Information about the palaces on the square allows us to understand part of Assisi’s history and its transformation over the centuries and to enter into the political and administrative heart of the city with its most prestigious places (such as Sala della Conciliazione, Sala degli Stemmi and Sala del Consiglio) where the public was not always allowed.