TOWER OF THE PEOPLE portal and commemorative stone

In 1501 ground floor spaces of the Tower of the People were given to the Collegio dei Notai to create an Audience Chamber. In 1524 the mason, Massimo di Puzio, engraved the stone portal according to a drawing by painter Cecco di Bernardino (Assisi doc. 1511-1547). On the key of the arch there is a stone shield with tools used by notaries: book, pen and inkpot. A famous motto about Arts is engraved on the transom: UNICA MUNDI FIDES. The coat of arms and initials visible on the right jamb are those of Notary Francesco Bovi. In 1531 the master carpenter, Paolo di Jacopo da Gubbio executed the door, imitating the shutters at the Collegio del Cambio di Perugia 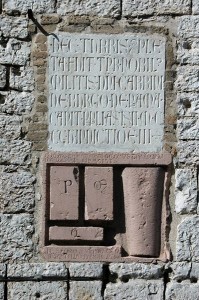 In 1349 the Captain of the People Angelo di Latero da Perugia ordered that a commemorative stone made with the mount Subasio pink stone be made at the base of the tower. It was built with the measurements and thickness of bricks packaged in Assisi – bricks, tiles, square tiles and roof tiles – plus three iron bars with the length of a cane, a passetto (small step) and a palm, used for clothes made of wool, silk and linen. The City hall statute of 1469 required that these models be applied at the base of the tower and regulated the time and place that the artisans could gather and sell their wares.